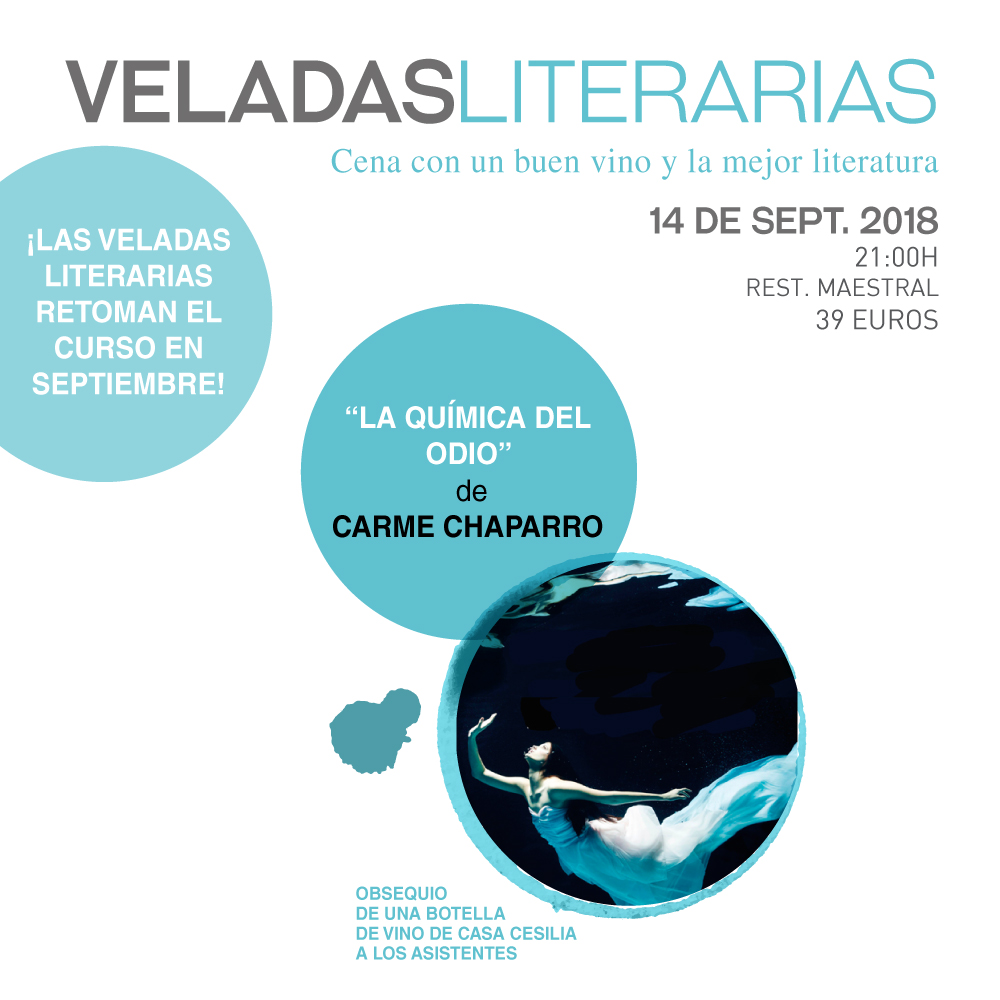 On September 14, Channel 4 News presenter (Informativos Cuatro) Carme Chaparro will kick off the Literary Evenings series at Maestral. On this occasion, she will present the second half of her thriller, “La química del odio” (“The Chemistry of Hate”), which was presented at the last edition of this literary event.


The new series of Literary Evenings starts off with second half of the novel that was enjoyed by our guests at the last edition of this event, “I Am Not a Monster”. This is not the first time that Carme Chaparro has been the protagonist of our evenings, as she presented her first novel in November 2017. Chaparro debuted as a writer with “I Am Not a Monster”, which received the 2017 Premio Primavera de Novela award. On this occasion, she will present the second part to this fascinating thriller that has already hooked thousands of readers, “La qúimica del odio”.

Literary Evenings at Maestral return to Friday nights with this new series following the great success of the last edition.  With renowned authors such as Pilar Eyre, Màxim Huerta, Boris Izaguirre, María Dueñas or the winner and 2017 Premio Planeta award finalist, Javier Sierra and Cristina López Barrio, the event was sold out on several occasions. For the remainder of the year, the Literary Evenings commit to continue attracting literature lovers with top-notch writers, such as Eva García Sáenz de Urturi from Alicante, with the release of the third part of her saga, “Los señores del tiempo” (“The Lords of Time”).

That’s why Maestral is the place to be on Friday, September 14 at 9 pm with a Literary Evening that, as always, includes special wines and a dinner menu inspired by the novel. After the wine tasting and dinner, the author will converse with the guests about the novel and sign copies of the book.

Following the success of “I Am Not a Monster”, which has been translated into several languages and which will be brought to the big screen, Carme Chaparro establishes herself as one of the most interesting and daring thriller writers in Spanish with “La química del odio”. Chief inspector Ana Arén doesn’t get a break: after she solved the case that almost ended her life, she must face a terrible task, the murder of one of the most famous women in Spain. Always questioned by her superior, heading a team that does not yet trust her and with the media focused in on the investigation, Ana finds herself before and apparently unsolvable crime where time and the past insist on working against her.

To kick off the series, the kitchen staff at Maestral has designed a special menu, as always, inspired by the novel. The meal will start off with baby lettuce hearts topped with marinated, roasted chicken, goat cheese, sun-dried tomatoes and Caesar dressing, followed by meat-stuffed lumaconi. The main dish is Valderas-style cod (cod seasoned with garlic, olive oil and paprika powder). And to finish off the gastronomic feast, guests will be served almond nougat flan topped with chocolate sauce and candied almonds. All courses are served, needless to say, by an exclusive Casa Cesilia wine, on this occasion ADN² (DNA²), keeping in line with the wines served during the writer’s first visit.

The next Literary Evening, served with the best gastronomy and wine, will be held next Friday, September 14 at 9 PM at Maestral. Tickets for the wine tasting and dinner event are 39 euros, and guests will be given a bottle of Casa Cesilia wine to take home. Reservations can be made by calling 965 262 585 or in writing via email at: maestral@maestral.es.